Bathory: Elizabeth, and the Courage of our Convictions

As we all learned in high school (or earlier, if you’re lucky), a Tragedy is defined by its subject’s Fall, or reversal of fortune (or peripeteia, for the vocab buffs). The ancient Romans (and to be fair, Shakespeare himself) seemed to perceive no fall greater than death itself, but for the Greek ideal, there were fates worse than death, and the greatest Greek Heroes were those who recognized this, recognized that they deserved such punishment for their tragic flaws, and accepted their punishment rather than escape through death.

Elizabeth Bathory is, by virtually any metric, a selfish, merciless, parasitic, destructive person. She uses the commoners like animals (both for labor and for sustenance), treats the nobles with disdain, and shows love only toward those who are unequivocally in her power (and often not even to them). Despite all this, she is one of very few characters that is consistent in her own morality, and because of this conviction we can find a certain nobility in her tragic descent.

In a reversal of classic comedies, Countess Bathory begins with a wedding.

The play opens with Elizabeth, not at the height of her powers, but optimistic and possessing a clear trajectory toward victory. Her opening soliloquy (a parallel of Richard III’s “Now is the Winter of our discontent”) says as much: she is marrying Ferenc Nadasdy to seize his power and reputation. She succeeds by scene’s end, but the seeds of destruction have also already been planted. Despite her efforts, her husband has “infected” her with affection. Ironically (though I’d argue is a fitting reflection of our own times), it is Elizabeth’s capacity to love others, limited though it is, that ultimately leads to her destruction.

Even so, the first three Acts of the play are a fairly straight line upward. The Countess is presented with obstacles, and she readily overcomes them using various talents and tactics, especially the myriad complications of 2.2. For Elizabeth, the first half of our production is very much a leapfrog between displaying her social and political talents before indulging bestial desire for domination and blood. This then leads to the first-half climax, 3.4, where the Bathory is allowed to indulge both to her fullest extent: as a general in battle, ruling over massive bloodletting, proving her political and strategic might, demanding and securing her own will over everything. “Let none deny I am indominable” she shouts out into the torrents of death. She does not yet know that her husband Ferenc is dying an ignoble death a thousand miles away.

“I will have royal blood!”

In Act 4, Agamemnon‘s prideful tread upon the purple carpet is paralleled in Elizabeth’s luxurious recline in red. Just when she thinks herself unassailable, however, mortality reasserts its heavy hand with the news of her husband’s death. One of the only two people she loves (excepting her divined self) is gone. She responds by upping the ante and insisting upon royal blood tonight,

“For that’s the tincture that will elevate
My sloughing flesh into Gentility
And make my vessel fast eternally.”

The Fall takes another soaring dive with the apparent betrayal by Kate (the other object of her love), and of course the appearance of the distant hand of King Matthias at last making itself known. In one proverbial swoop, Elizabeth loses her loves, her trust, her power, her reputation; and most damningly of all, these reversals ruin her bid for immortality.

“My fear is mine, you cannot take it from me.”

It is endlessly intriguing that, just before her arrest, Elizabeth has the blood of two people available to her. To achieve godhood, she chooses not the royal-blooded Katalin, but rather the common and servile Kate. This, more than anything, suggests that Elizabeth has some other, secret desire in the consumption of blood. The fact that she chooses Kate’s blood suggests that Elizabeth saw something unique in Kate, and yet refused to take her blood before this moment. That, or that Kate had only then become something new, something divine.

The Fall of Bathory

Elizabeth has unquestionably lost everything in the final scene, when even a glorious death is denied her by the spite and pettiness of the so-called virtuous. However, this play is not just a story of a powerful person losing everything: it is the story of someone fighting to maintain their beliefs in the face of mounting temptation. “Damn hypocrites,” Bathory calls everyone else.

“You Devils have Beauty, wretches the Divine,
But I alone possess them both, both mine.”

In this speech, Elizabeth further implies that honesty is not possible (in others) unless all artifice has been stripped away, even to such an extent that one’s social abilities and natural beauty is destroyed. It may be that her love for Kate comes only because Kate’s capacity to charm has been forcibly removed.

The King declares the virtue of finery

King Matthias and Count Drugeth show that they are willing to say whatever they must, ally themselves to whatever ethics they need, in order to get what they want. Duke Thurzo appears morally consistent, but as he never does anything it’s difficult to say (it is incredibly appropriate that Thurzo, like the legendarily hesitant Hamlet, is dressed all in black). Petr Zavodsky is alone among Bathory’s adversaries in her moral consistency, but is so made by nature that Elizabeth can barely recognize her as human. Moreover, it could be argued that Zavodsky turns a deliberately blind eye to the King’s hypocrisy in order to achieve her own ends. This leaves the Countess alone as a morally consistent figure in a world that, regardless of its values, consistently abuses and dehumanizes the weak.

In Act 5, the King offers Elizabeth three chances to escape her tragic fate, if only she will admit fault. Such an admission, however, would make her just like everyone else, and remove all justification (in her own eyes) for her terrible actions. It would make every accusation true, and deny her the Divinity in her own mind that she was unable to assert on Earth. Rather than accept an extraordinarily easy out, Elizabeth chooses a slow, painful, drawn out, ignominious end. She will be slandered, forgotten, and any history will be written by her enemies. No one will understand what she perceived as the rightness of her own actions. Except herself. And that, it seems, is what mattered most.

Her enemies dismiss her as mad, but as the too-thoughtful Thurzo says,

“What else is there, when Madness is giv’n sway?
What else but Madness when the Law is honor’d
In Letter while its Spirit is broken? What
Betokeneth this World where Words are Vapor
And evanesce with their own Breath? What greater
Revenge can this Devil betake on us
Than leave us in this Hell we have created,
Where Men crack fang’d Smiles, and naked Throats
Will justify their opening to us.
I have no Wisdom, not a Tincture for it,
To purge this thorny poison from our Veins.
Be off, be thoughtful, all of us, and ask:
What greater Penitence can we be worth,
Than t’ see ourselves in th’ Monsters of the Earth?”

“The Gods are beautiful and powerful / And through such blessings display their Favorites.” Mary-Kate Arnold as Countess Bathory. Costumes by Delena Bradley. Lighting by Benjamin Dionysus. Photo by iNDie Grant Productions.

Petr Zavodsky is, by most measures, the hero of Countess Bathory. She doggedly pursues justice against the evil Elizabeth; she is motivated not by gold or personal vendetta but by moral right; she is of humble birth (something we’re supposedly really big on in the US); and she overcomes many obstacles, rebuffs, and outright humiliations to accomplish what is right. There is no one else in this play that actively champions a selfless cause.

Unfortunately, the structure of the story and the elements of our production depict poor Zavodsky as a villain, or even a mere villain’s henchman.

Petr is the opposite of Elizabeth in virtually every regard. Elizabeth is highborn, wealthy, in charge, motivatedly selfish, charming, beautiful, and possesses the self-awareness of how to use these considerable advantages. Petr is common, un-moneyed, an assistant, myopic in her motivations, guileless, rodent-like (thanks to a gorgeous performance from actor Sarah Jean Tilford), and has no idea how to apply the limited advantages these attributes afford.

But Zavodsky has right on her side, dammit, and she’s gonna push that as far as it can go. Sadly, no one seems to appreciate Zavodsky’s virtue. She is unpraised, oft mocked, and never acknowledged for her efforts nor even her eventual (arguable) victory. She seems to graduate at some point from Thurzo’s assistant to the King’s, but there is no official word, and she continues to be alternately threatened or bossed around, depending on where she is.

The fact that the sexless Zavodsky is reviled by both sides, dismissed and ignored, while everyone worships either the stereotypically “male” King Matthias or the decidedly “womanly” Countess Bathory, is a point I’ll leave largely to more educated minds than my own.

It’s lucky then for Petr (and for all the young women of Hungary) that this adjunct seems utterly unconcerned with how others view her. Humble, pious, and zealous in her persuit for justice, Zavosky’s only reward in the end is that justice is done. We should all be so fortunate as to have civil servants such as she.

COUNTESS BATHORY is back, Thursday – Saturday. Be sure to reserve your FREE seats now!

“The Gods are beautiful and powerful / And through such blessings display their Favorites.” Mary-Kate Arnold as Countess Bathory. Costumes by Delena Bradley. Lighting by Benjamin Dionysus. Photo by iNDie Grant Productions.

Countess Bathory is “Beautifully penned… with Mary-Kate Arnold nailing a role she was born to play.” – Ellen Cribbs 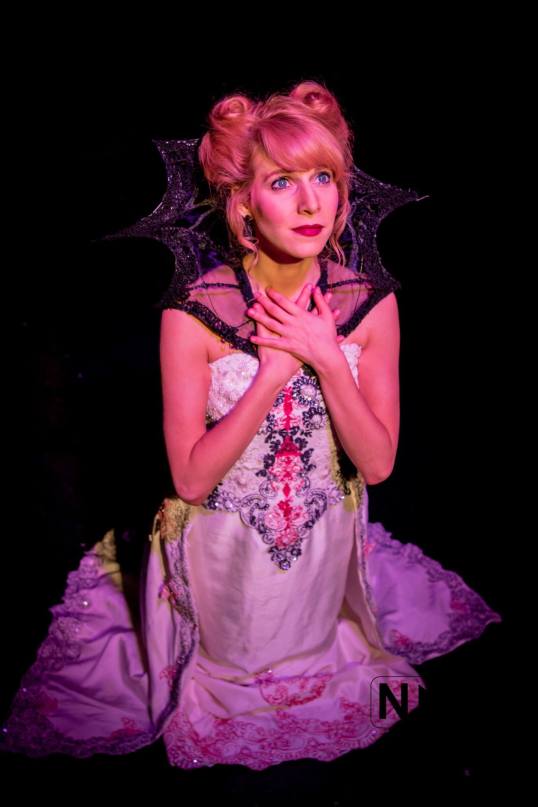 “Heart, petrify, and be as hoary Rock / Befriended but my silt and sand.” Mary-Kate Arnold as Elizabeth Bathory. Costumes by Delena Bradley. Lighting by Benjamin Dionysus. Photo by iNDie Grant Productions.

Everything You Could Want… And More

“Tired of seeing Romeo & Juliet and King Lear for the 50th time? Then you should definitely check out Countess Bathory: A New Elizabethan Tragedy by Jared McDaris. It is everything you could want in a Shakespeare Tragedy and more. More than you are expecting. Of that I’m certain. They just opened so go see it! It’s a bloody good time.” – Brendan Stallings

Humanity and Beauty… Believable and Horrifying

“GO SEE THIS PLAY!! Gorgeous writing and truly exceptional acting. Mary Kate Arnold brings the  countess fully to life, imbuing her with a humanity and beauty that  makes her actions all the more believable and horrifying. A wonderful evening at the theater!” – Laura S.

“Dark subject matter handled deftly, surprising moments of humor and pathos… it was very pleasant to hear non-Shakespearean verse that was just as passionate and fiery as the Bard’s.” – Jeremiah Barr

COUNTESS BATHORY finishes its first weekend tonight, but we’ll be back next Thursday. Feel free to drop by tonight, and we can try and make room for you, or reserve a seat for next weekend. 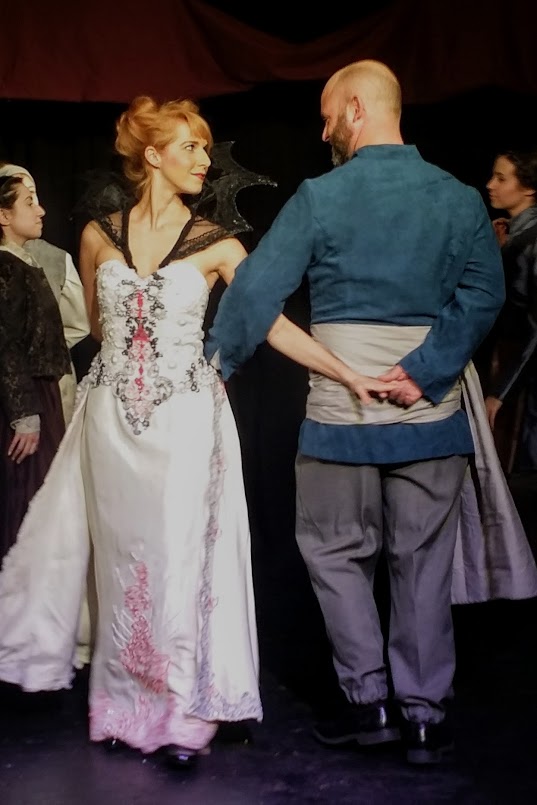 The Bathory Has Arrived

“Ladies and gentlemen, you have to see the show! But you might wanna leave the kiddies at home. It is brutal, intense, tension so thick you could cut it with a knife (might take a couple passes even). One HELL of a show!” – Dylan Crow, audience

We are open and rolling. Reserve your seats, or walk on up and roll the dice. Hope to see you there!